I feel very lucky as I had the chance to visit France and Italy in the Spring of 2013. I traveled to many places such as: Paris, Versailles, Lisieux, Venice, Rome,Vatican… The trip brought amazing experiences in my life. I would like to share with you just a few of them.

Let me start with Lisieux – hometown of Sister Thérèse of the Child Jesus, my patroness saint. I have read many books about St. Thérèse since I was a child. I always keep a special devotion to her. I just cannot believe that my dream of seeing her place has come true. All things I saw in pictures now appear before my eyes. 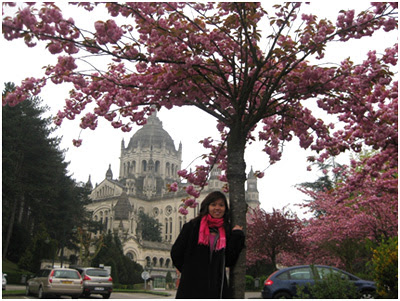 The Lisieux Basilica behind me was finished in 1954.
It is a Roman Catholic church attracting more than two million visitors a year, thus the second largest pilgrimage site in France after Lourdes. The huge basilica can accommodate 4,000 people. The minor basilica is beneath the large one and dedicated to St. Thérèse of Lisieux. 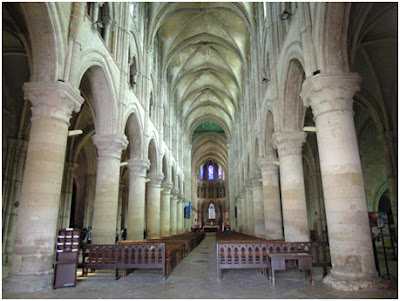 The interior of the basilica has its structure typical for cathedrals in France. The Notre Dame de Paris also looks like this, especially as regards the ceiling. 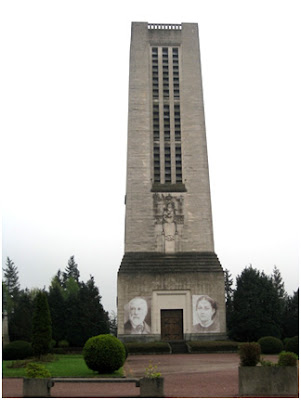 People can see on the bell tower of the basilica the pictures of St. Thérèse’s parents. Their pictures can be found easily in many places in Lisieux as well. 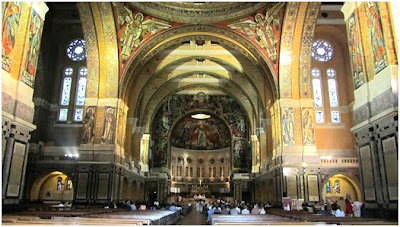 The minor basilica is covered with many colorful pictures on its columns and ceiling. 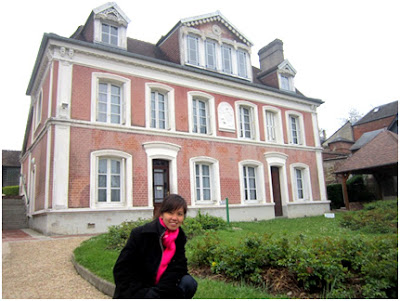 The nice house where Saint Thérèse had lived with her family since she was four and a half years old until she left for the Carmelite convent. Rooms and furniture are kept nearly intact. Visitors can see in the Saint’s room her bed, dresses and toys. 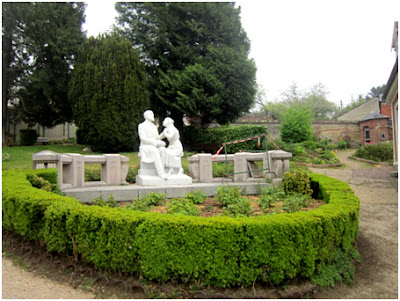 The little garden behind her house where there is a sculpture depicting St. Thérèse asking her father’s permission to enter the Carmelite Convent. 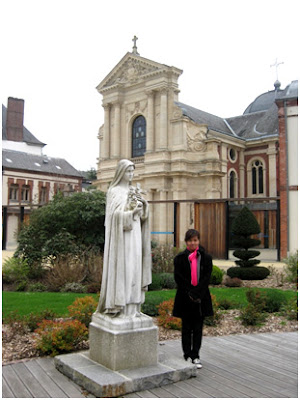 St. Thérèse’s statue in front of the Carmelite Convent.
There is a wonderful museum where are displayed her memorabilia such as the objects she had used during the time she lived in the convent. What impressed me much is the photo in which she took the role of Saint Jeanne d’Arc in the play written by herself.
The next places I would like to show you are Rome and the Vatican. 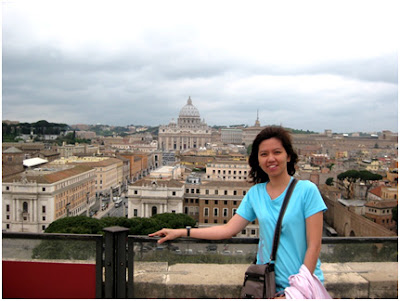 I stood at the top floor of Castel Sant’ Angelo, or Castle of the Holy Angel.
From a huge terrace you enjoy a magnificent view over the city. In the 2 rooms of the castle are displayed paintings related with St. Peter’s life, since he was called by our Lord Jesus Christ in Galilee of Judea until he was martyred in Rome.
As you can see, Vatican is just right behind me. It is not difficult to realize the famous Basilica of St. Peter, the highest domed building in the photo. 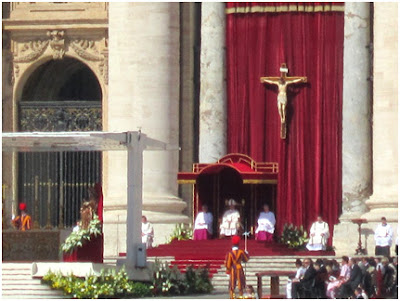 Normally, people can see the Pope at St. Peter’s square on Wednesday only. Though I went to the Vatican on Sunday April 28th, 2013, I could attend the Holy Mass presided by Pope Francis himself because, fortunately, there was a celebration for those boys and girls who had received the Sacrament of Confirmation on that day.  How honored I was! 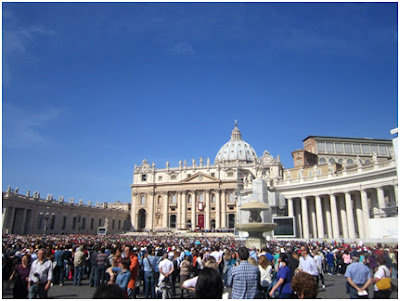 The Mass would start at 10 am but since 7 am the St. Peter’s Square was full of people. It lasted up to nearly 12am. While the Holy Mass was on no one could get into the basilica. After the Holy Mass, people looked for a restaurant to have lunch, then returned to the Square at 2pm and fell in line about 30 minutes before entering the Basilica.
I believe that every catholic wishes to go there at least once in their life. So it is not too hard for them to wait for 30 minutes or even for more. It was really worthy of spending time for our religious devotion. Seeing with one’s eyes huge sculptures and paintings inside St. Peter’s Basilica was surely memorable experience. 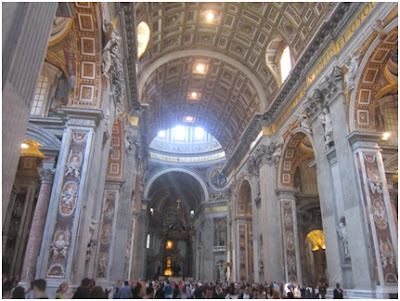 The basilica is very spacious but not a chair can be found.   Therefore, people are able to move freely admiring the masterpieces. 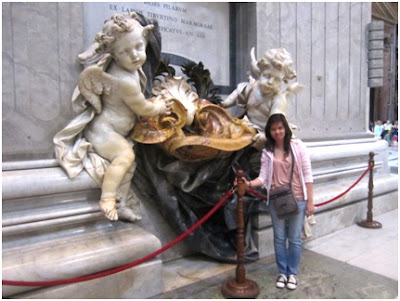 You can see how big the statue is.
Besides St. Peter’s Basilica, I visited the Basilica di San Giovanni in Laterano, the Basilica di Santa Maria Maggiore and some historic places. I stayed in Rome for 3 days and took thousands of photos but all was just a small piece of whole picture. People say that there are thousands of churches and pilgrimage sites in Rome and Europe as well, and each one has its own story. I wish to have another chance to go back there in a longer trip to see and hear those interesting stories. 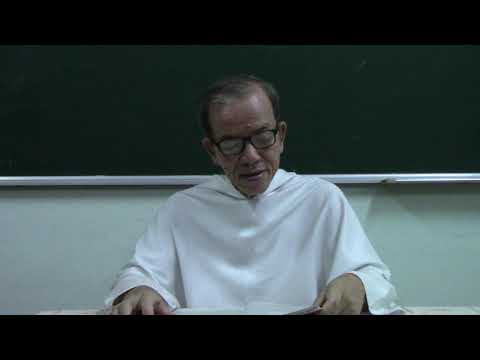