The Gospel story of this Sunday Holy Mass tells us how Zacchaeus, a chief tax collector, was saved by the Lord for his sincere and decisive conversion to God.

Tax collectors were, in the historical and political situation of Israel in the times of our Lord’s mission, those Jews who deeply involved themselves in collaboration with Roman invaders and oppressors.  They had, on the one hand, to show loyalty and dedication to their Roman masters by extorting money from their own countrymen, and they knew well, on the other, how to take advantage of their position to increase their riches.  As the result of those grave crimes, they were considered by the Jews as public sinners much worse than the Romans.  People kept them at a distance as one must avoid something dirty, dangerous and shameful.

Such a reaction of the community to sinners may bear two different consequences: the positive one is a stern warning to the criminal that they should abandon wrongdoing and take reform of their way of life; and the negative one is tantamount to a merciless rejection and elimination of the sinner from the community.

Christ our Lord, by going to the house of Zacchaeus, invites us, His believers, to share with Him a strong sense of Christian moral standards for fair and human judgment and treatment.  As the authentic Teacher of God’s justice, Christ never allows sins to go without trials.  He did not show any bias in strongly criticizing wrongdoing of even those in top power, included political and religious leaders.  However, He expressed so great a love for sinners that He laid down His own life on the cross to save them from slavery to sin and eternal death.  For God, Who is slow to anger and of great kindness, love always prevails over justice.

We, too, strongly condemn wrongdoing, but we embrace our sinful sisters and brothers and we give them a chance to go back to the merciful and forgiving God.

It was Christ’s kindness and compassion that won the heart of Zacchaeus who was denied by his neighbors all chances to stand up from slavery to sinfulness and get out of the darkness of death.
It was Christ’s sincere and caring heart that was powerful enough to turn a selfish, stingy and corrupted government official whose god is money and social position into another Good Samaritan who gave up half of his possessions to the poor, repaid four times in compensation for any damage done to his neighbors.

It was Christ’s compassionate love that brought saving power to Zacchaeus.

It was also Zacchaeus’ sincere and decisive conversion to God, with concrete and real acts of repentance of his sins and reparation for his wrongdoing that made him worthy of God’s mercy and forgiveness.

“Today salvation has come to this house.”

loi-nhap-the.com First Reading: (2 Kgs 5:14-17) A reading from the second Book of Kings Naaman went down and plunged into the Jorda... 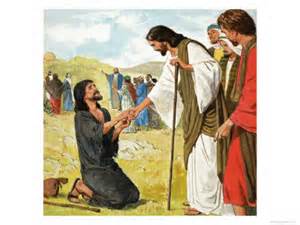