“They Went And Saw Where He Was Staying, And They Stayed With Him That Day”
(Jn 1:39)

This Sunday Gospel story reports to us how the first disciples responded to the call by Jesus Christ, our Lord and Savior, in a spontaneous and determined way by joining Him in preaching the Good News of God’s salvation project.

Jesus was looking for some friends willing not only to work with Him but also to share with Him a new way of life dedicated to serving God and humanity.

His is not any plan established for social, economic, political or whatsoever purpose.  His is that of building God’s Kingdom where all people live in love, peace and lasting happiness.

For that aim to be achieved, one has to detach themselves from all forms of dependence on material needs.  That was the reason why when asked by the disciples about His home or living conditions, Jesus frankly told them just to go and see with their own eyes the reality that, as He said, “Foxes have dens, and birds of the sky have nests, but the Son of Man has nowhere to rest his head.”[1]

Later in their missionary activities, the disciples would understand more profoundly and completely what Jesus their Master meant by “the Son of Man has nowhere to rest his head.”  That would be the most crucial requirement among others for an authentic Christian missionary sent to the building of God’s Reign without any human support except for divine love and care:

Do not take gold or silver or copper for your belts; no sack for the journey, or a second tunic, or sandals, or walking stick.[2]

Being completely detached from material needs, from economic and political backing, clearly signifies that you are totally free to preach the Word of God, to tell the saving truth of Jesus Christ without any bias, without any fear, and without any discrimination.

The first disciples who were called by Jesus carefully approached Him, scrupulously studied His Way of Life and finally found what they had eagerly been looking for, as admitted that Andrew the elder brother of Saint Peter: “We have found the Messiah—or the Christ.”[3]
Indeed, our service and worship of God should not by any means be a trade of interest after a well-known principle by business-minded people: “Do ut des—I give you something so that you will give me something back.”  Some of Jesus’ disciples once failed to fight that mentality of trade-orientedness when frankly—and shamelessly—asked Him:

We have given up everything and followed you.  What there will be for us?[4]
Instead, our service and worship of God should surely be an expression of our profound gratitude to God the Father Who so loved us that He gave us His only Son, Jesus Christ as the ever best blessing thanks to Whom we were forgiven our sins and worthy of being His adopted children and heirs to His Kingdom.

That trade of interest mentality has also affected us Christians—no matters who we are: the laity, the clergy and the consecrated—so seriously that it can be traced as the background for all that we think, speak and do: “We have given up everything and followed you.  What there  will be for us?”

So sad to say that at the end of our life what we expect to receive for our years of  faithfully serving the Lord God turns to be something else but God Himself.

So sad to see that what we will ask the Lord God for one day for our service of Him is just something of very low price such as a boarding pass into heaven, totally unaware of the truth that paradise without God’s presence would be meaningless and useless.

A story about Saint Thomas Aquinas, doctor of the Church, could tell us something wise enough.  One day, the saint was praying in front of the crucifix when Jesus appeared to him and told him to just ask for a reward whatsoever for his good service of Him.  Without a second thought, Saint Thomas answered the Lord: “Good Lord, I want nothing else but You.”

Yes, when we have Jesus, we have not just heaven, but the Maker of heaven Himself. 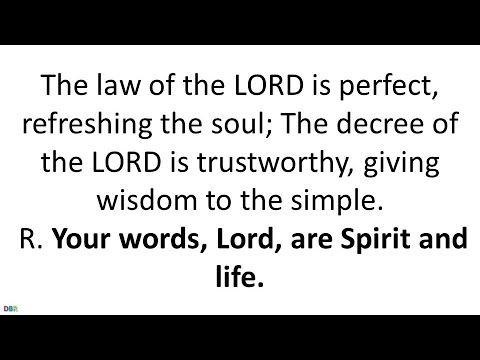